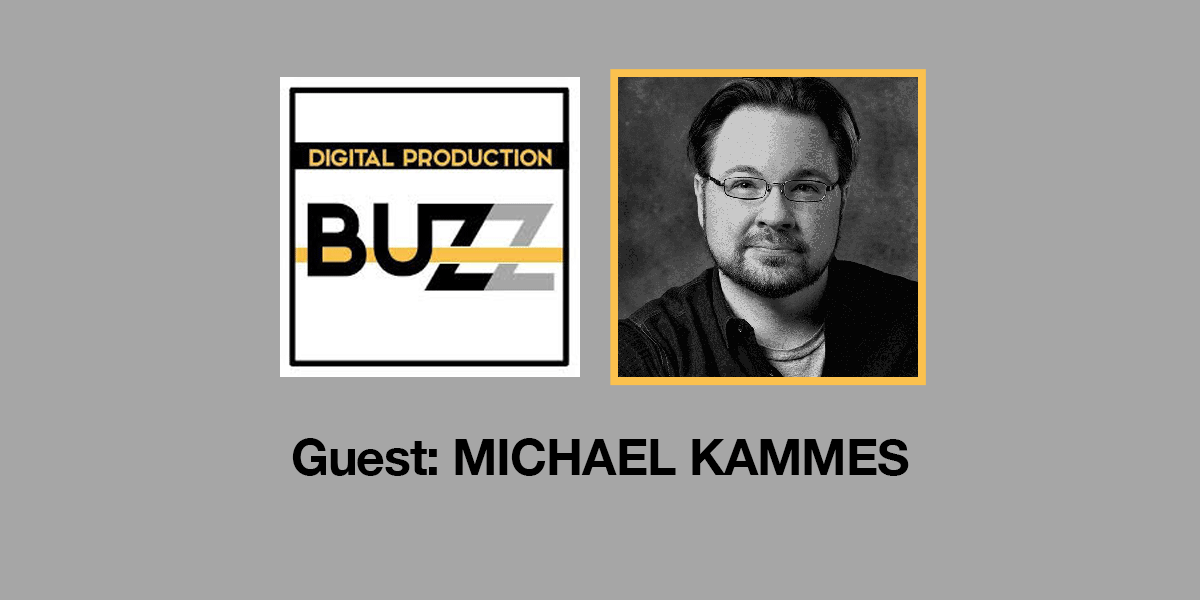 On this episode of The Buzz, we talk with experts about the current state of technology and how it affects what we do in the future, user groups, and the way we teach technology.

Larry Jordan: As Director of Business Development for Bebop Technology, Michael Kammes leverages his experience with creative technology and tools providers, to accelerate growth and provide strategic perspective across marketing; sales and partnerships. What that means is, Michael understands tech and he’s also a frequent and welcome contributor to The Buzz. Hello Michael, welcome back.

Larry Jordan: I always enjoy chatting with you, because, tonight we’re looking at media technology; trends to watch and what we need to know to stay current. As you look back over the last year, what new workflow, technology, or software has emerged that seems significant for the future?

Michael Kammes: I think there’s two big things Larry and I’d rather focus on, if possible, not just “Oh this machine has more cores,” or “This software can play back more streams.” I think, right now, we’re in a very good place with the three or four big software players, in terms of NLEs and we have a lock on what the audio realm is. I think, if we take a look at some of the over-arching technologies, I think that the red carpet’s kind of been rolled out for them.

Michael Kammes: One of them is something that one of your last guests just had, Philip. When we talk about Lumberjack System and the tools of incorporating machine learning and, dare I say, AI into storytelling; not to replace Editors, but to take a lot of the pedestrian ditch digging work out of it. Let Editors create, as opposed to doing the more menial tasks. I’m really looking forward to seeing how we can train machine learning to do this for us.

Larry Jordan: You’re right. Philip’s number one comment was machine learning and smarter tools and I want to come back and discuss machine learning with you as well. But what’s your second topic; so we get them both listed upfront.

Michael Kammes: The second topic, I think, is leveraging machines that are not within arm’s reach. It’s not just the Macbook Pro on your desktop, or the PC sitting, you know, at the quiet side of your edit bay; it’s leveraging Cloud, it’s leveraging disparate forms of technology that are not at your fingertips, but now, because of the Internet, we now have access to. That’s not just the technology, but the folks who understand how to use that technology, I think, is going to help storytelling immensely moving forward.

Larry Jordan: Let’s switch back to machine learning for just a minute. How do you see that as enabling storytelling?

Michael Kammes: Storytelling is creativity, it’s the craft and the more time you’re spending doing things that are not craft related, the less time you can spend creating. If we’re talking about organizing keywords, or creating bins, or logging footage, or trimming out uhs and ums; the stuff that takes away from the pure storytelling aspect, I think anything we can do to reduce the pedestrian work, to give more time to the creatives, is a godsend for all creatives. I think that’s where we’re going to see machine learning take precedence first.

Larry Jordan: Let me push back at you on that. I can understand how machine learning would make the tools easier to use and Philip used the term smarter tools; but as technology becomes both more powerful and cheaper and does more, how does the creative artist remain in business when the barriers to entry keep getting lower?

Michael Kammes: That’s a great question Larry and something that I discuss with my colleagues quite a bit. I think we saw this, to some extent, during the great NLE changeover back in the late 90s, when we went from the $100,000 Avid system to, well now we have Final Cut Pro and Adobe and these other software packages.

Michael Kammes: I think there was a time, in the late 80s and 90s, where you could be just a creative; because the financial barrier of entry was so great to get in that not everyone had the technology. How that applies now is, we’re going to see more and more creatives having to do even more and I know this has been something that has been pushed for years.

Michael Kammes: Editors have had to start doing motion graphics and they’ve started to be pushed to do more Photoshop work. But I think, this trend is not going to stop; I think we’re going to see more and more Editors saying, I have to diversify my toolset; I have to learn these and I need to market myself. I can’t just be an Editor on staff. I need to be a one person band and be able to market myself as knowing all of these tools; not just the creative storytelling tools, but also the things for graphics and motion graphics too.

Larry Jordan: Rather than opting for specialization, you’re recommending that all of us become generalists?

Larry Jordan: Your second point is leveraging machines that are not in arm’s reach. What does that mean?

Michael Kammes: If you were to buy a machine now, you’re going to be saddled with that machine for three years, five years, or even longer and I think we’re getting into a point where we no longer need to sit on that one machine, or two machines. I think, if we start leveraging the technology in the Cloud, or technology that’s in someone else’s data center; to do rendering, to do processing, or to even plug into tools that we don’t have access to, is going to help us immensely.

Michael Kammes: There are a ton of tools out there; asset management systems, render systems, even transcoders, that are hundreds of thousands of dollars and if those move from a CapEx model; meaning you buy it, to an OpEx model; meaning you only pay for it when you use it, that’s going to bring a lot of these tools, which are highly expensive, down to a more consumer, prosumer, or one off perspective for creatives.

Michael Kammes: The more we can leverage tools that we don’t have to buy and we can rent, I think is going to make the quality of product that much easier and will certainly diversify the tools that you can use.

Larry Jordan: How do you reconcile that with the ability to actually access our projects? If we’ve got to rent the software, or rent the hardware, if we’re between projects, I suddenly have to re-rent it just to be able to view something, that strikes me as becoming more awkward, not less.

Michael Kammes: Larry, if we look at the simple things like transcoding, you know that doing a standards conversion; going from 2398 to 297, or back, that simple conversion can be really, really hard. But, if we look at these expensive enterprise transcoders, that are already in the Cloud, that we can rent on a per project basis, what’s wrong with that? How would that be detrimental to the creative and storytelling process, if we get access to that technology for pennies and the dollar; but only when we need it?

Larry Jordan: It’s become obvious, as both you and Philip have talked about, that machine learning and AI in general is going to be part of our lives in greater and great proportions going forward. How do creative artists embrace this and use it to enable our work; rather than fear it, because it’s going to be restricting what they used to be able to get paid for?

Michael Kammes: That goes to the kind of cornerstone of our industry. If you stop and take a breath and look around for too long, you might miss it. Our industry is constantly evolving. I know it’s kind of trite, but we joke in the industry that there’s two reboots every year, right? NAB and IBC. I don’t know of another industry where there are two milestones in a 365 day span, where the industry can change.

Michael Kammes: I think that anyone coming into the industry has to realize, you can’t rest on your laurels and you can only improve your skills and that is a constant evolution that you have to do and, if you can’t, then maybe you should move into management.

Larry Jordan: One last question. As you look to the future, stories will always be with us. Will the determining factor to success as storytellers be new technology; or new forms of distribution; or something else?

Michael Kammes: Wow, that’s a good question. Given the massive VOD model and the fact that we can consume video from just about anywhere, on everywhere, I think if we’re using a monetary scale as being the judgement point for what’s successful, it’s going to be marketing. It’s going to be standing out from every other angle you’re being bombarded with, in terms of media to consume. I think, if you look at it from that perspective, it’s going to be the marketing angle.

Larry Jordan: Well, I think your observation is absolutely correct; but what does a creative artist need to do to be a successful marketer? Because that leads into a lot of stuff that we’re not good at. We’re good at telling stories, we’re good at using tools to tell stories; but now we’re into something different, which is bragging about our work; which many of us are not necessarily comfortable doing.

Michael Kammes: I think, for many, many decades, what we consumed on television and then what we consumed on basic cable television was media that was meant for the masses; it didn’t appeal to niche groups or subgroups. I think, what we’re finding with the Internet over the past couple of decades is that, these smaller groups, these niche interests do have a sizeable audience and that sizeable audience does have purchasing power.

Larry Jordan: How do you reconcile this emphasis on the niche market; with what you said at the beginning of the interview, which is, that we all need to be generalists?

Michael Kammes: Being a generalist, in terms of technology, is paramount; but I think, honing your skills to one or two particular verticals, I think, is going to be important moving forward and then tying it into marketing, to push yourself and market yourself to those niches.

Larry Jordan: Michael, for people that want to follow the thinking that you’re going through, or keep track of the projects you’re working on, where can they go on the web?

Michael Kammes: Two places. You can go to michaelkammes.com; you can also go to my web series, 5thingsseries.com.

Larry Jordan: That web series is 5thingsseries.com and michaelkammes.com. Michael Kammes is the Director of Business Development for Bebop and Michael, as always, thanks for joining us.

Michael Kammes: Thank you for the opportunity Larry, I’ve always appreciated it.

Listen to the FULL podcast at Digital Production BUZZ >>

Independent Filmmaking in the New Era of the Cloud

Since 1984, when I began my career in the film industry working on the production of independent...

Editing in The Cloud requires a different workflow than editing with local storage. Tonight,  ...

5 THINGS: An Intro to Using the Cloud for Post Production

In this new episode of his fantastic 5 THINGS, our own Michael Kammes provides an incredible...