The Art of Video Editing

I started out at Desilu in 1966. I am lucky that in my career I was able to edit half-hour multi-cam and single-cam comedies, hour-long dramas, movies of the week, and feature films. After my years in editing rooms, I helped build and run companies that offered Avid, Premiere, Lightworks, and (RIP) Ediflex. And now at BeBop we enable post-production in the cloud.

Having been an editor and having hundreds of editors as clients over the years has given me a unique view of the creative art that is video editing, and also on how the art has influenced the technological evolution and vice versa. So I thought it would be interesting and fun to share some of this perspective.

They call editing the “invisible art”, which seems to contradict with filmmaking, the most visible medium of all. However, the truth is, as an editor, you want the audience to feel an emotion from your edits, but not see the physicality of the actual editing. It doesn’t matter whether you learned on Avid Media Composer, Adobe Premiere Pro, Final Cut Pro, Lightworks, BHP TouchVision, Montage, Laser-Edit, Editroid, Steenbeck, Kem, Moviola or (RIP) Ediflex; the creative process is the same. To be a good editor you have to have a very strong sense of story. As in writing a novel, you need to set a pace that will keep the reader (viewer) entertained and interested in following the storyline to the conclusion. 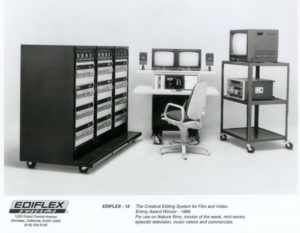 Editors, as do most artists, usually adapt their own styles to this creative craft. For example, my first assisting job was on “The Odd Couple.” One thing I learned early on is that cutting comedy is much harder than drama. In comedies timing is critical; being a frame early or late can kill a joke. For a few years I taught “The Art of Editing” at Loyola University, and my routine was to bring in a different editor for every class. The biggest takeaway for my students was learning how differently editors work to basically achieve the same end: a story on film.

One Oscar-winning editor cut all the dialogue first, creating, in effect, a radio play. She said that as the dialogue was usually the key to a scene, it was important to use that as the primary editing rule. Some editors cut everything a little long and then trim as needed. Some cut tightly. One thing that is probably a constant in editing is using the actor’s eyes. We all tend to watch people’s eyes in real life, and in editing it is the same. We use the actor’s eyes to throw cuts, and try to find eye movement in the direction we want to edit. For instance if you want to go from one actor on the left side to one on the right, you might use another actor’s reactive glance from left to right as a bridge. Some editors (me among them) even “talk” to the actors as we edit, repeating lines to them. I also used to play music while I edited, and I would pick songs that I thought complemented the scenes. This helped me with my rhythm.

Speaking of editing with music, if you get a chance you should watch “Baby Driver”, edited by Jonathan Amos and Paul Machliss. Every scene is edited to a different song and it is an amazing accomplishment.

The one truth about editing is you cannot teach someone to edit. You can teach them to use different video editing systems, but the art of editing has to be inherent in you. Over time you will learn different styles and tricks, but the feeling of how to tell a story on film is a gift. It’s probably no surprise that I have never met an editor who is not an avid reader!

Where the art of editing and the technology that enables it intersect is where I’ve spent my entire career. In my early days at Desilu it was film editing. It was a physical art where your first job was carrying film from shipping to the cutting rooms, from the cutting rooms to the projection rooms, and back and forth. Film can be very heavy, and you had to be able to ride a bike! The “eight-year rule” was in effect back then. You had to be a Group 3 apprentice for four years, a Group 2 for four more years, and after eight years you could become a Group 1 editor. You could go to medical school and be cutting brains quicker. I became a Group 1 editor and went on to cut many shows.

In 1984 my career took a major turn when I was the editor selected to help design a new video editing system. In a small apartment behind Universal, I edited 28 episodes of “Still the Beaver”, working with Adrian Ettlinger (creator of the CMX 600, the very first non-linear editing system) to create a new non-linear video editing system, the (RIP) Ediflex. It had a 64K Commodore computer and I used a light pen to control six VHS decks that all held the same material, early random access storage and a 5 &1/2 floppy drive. The Ediflex used a data system based on the lines in the script (Script Mimic ™) as the editor’s guide. In creating the Ediflex, Adrian decided to use this as the key because in all his years in editing rooms there was one constant: the editor was always looking at a script.

Then we had to create a market for this new creative tool. We had to train film editors (many of them in their 40s, 50s, and 60s) how to use a computer (their first!) to edit video. We were tremendously successful, and within three years 80% of the television series on all three networks were being edited on the Ediflex. The reason for our success was that the advent of non-linear video editing had given my peers and me the incredible ability to mold and remold the material over and over and over and – just as important – save multiple versions so you could put it back the way you had it after directors, producers, studios and networks made you try their many ****** ideas! And we an incredible support team in our trainers and engineers. Trainers spent from two weeks to, in one case, a full 24 episode season with the editors one-on-one or until they felt comfortable. Editors are driven by a simple rule: “You have to get the show out of the room”. (this also rules our support here at BeBop!)

With Adobe Premiere Pro and Avid the video editors of today have so many more tools on hand, visual effects, multiple tracks, and access to much more media. However, the thing about editing is that it still comes back to the story. I put that silent close-up in the first scene so that in the final scene it will trigger an emotion that tells the story I want you to enjoy.

The funny thing is though, after 53 years in the business I am essentially back to carrying film again. But at BeBop, we are now carrying film through the internet in pixels, not on reels. And we can carry a lot more, a lot further, and it is a lot lighter. But I do miss the bike!

The Ultimate Beginners Guide to GDPR Compliance in 2019

Not sure where to begin with GDPR compliance? The folks at VPN Geeks have written a super handy...

IABM today announced the new line-up for its Americas Members’ Council and its new chair – Paul...

Is Post-Production Ready for the Cloud? – Michael Kammes at LACPUG